Morocco is a North African country bordering the Atlantic Ocean and the Mediterranean Sea, is distinguished by its Berber, Arabian and European cultural influences.

The capital Rabat’s Kasbah of the Udayas is a 12th-century royal fort overlooking the water.

A journey into the Sahara can be as varied as the desert itself, but there are some quintessential Saharan experiences.

Travel in the Sahara is best between October and April or early May when daytime temperatures are generally bearable.

Merzouga is a village in the Sahara Desert in Morocco, on the edge of Erg Chebbi, a 50km long and 5km wide set of sand dunes that reach up to 350m high. Most people are here to take a camel safari into the dunes.

The city has two old medinas, the larger of which is Fes el Bali. It is listed as a UNESCO World Heritage Site and is believed to be one of the world's largest car-free urban areas.

Located by the Atlas Mountains, Fez has a Mediterranean climate, shifting from cold and rain in the winter to dry and hot days in the summer months between June and September.

Fez is becoming an increasingly popular tourist destination and many non-Moroccans are now restoring traditional houses as second homes in the Fez medina.

is a fortified city, or ksar, along the former caravan route between the Sahara and Marrakech in present-day Morocco. Most citizens living in the area now live in more modern dwellings in a nearby village, although there are 4 families still living in the ancient city.

This giant fortification, which is made up of six Kasbahs and nearly fifty ksars which are individual Kasbahs, is a great example of earthen clay architecture.

Aït Benhaddou has been a UNESCO World Heritage Site since 1987 and several famous films have been shot there.

Chefchaouen is situated in the Rif Mountains, just inland from Tangier and Tetouan.

The city is a popular tourist destination because of its proximity to Tangier and the Spanish enclave of Ceuta.

Chefchaouen is a popular shopping destination as well, as it offers many native handicrafts that are not available elsewhere in Morocco, such as wool garments and woven blankets. The goat cheese native to the area is also popular with tourists.

Marrakech is a major city in the northwest African nation of Morocco. It is the fourth largest city in the country after Casablanca, Fes and Tangier.

The Jemaa el-Fnaa is one of the best-known squares in Africa and is the centre of city activity and trade. It has been described as a "world-famous square", "a metaphorical urban icon, a bridge between the past and the present, the place where Moroccan tradition encounters modernity.

Marrakesh is possibly the most important of Morocco's four former imperial cities.

Morocco is in Northern Africa and bordering the North Atlantic Ocean and the Mediterranean Sea.

Size 446,550 sq km, slightly larger than California, US. Morocco enjoys a Mediterranean climate, becoming more extreme in the interior. The northern coast and interior are mountainous with large areas of bordering plateaus. The rest of the country consists of inter-montane valleys and rich coastal plains. Its lowest point is at Sebkha Tah -55 m; its highest point is Jbel Toubkal 4,165 m in the High Atlas mountains.

Just over 32 million people live in Morocco. Life expectancy is around 70 years. The birth rate is on average 2.8 per woman. The literacy rate is 64% for males and 39% for females.

Arabic (official), Berber dialects, and French which is often the language of business, government, and diplomacy.

Morocco's long struggle for independence from France ended in 1956. The internationalized city of Tangier was turned over to the new country that same year.

When to Go to Morocco

As with many destinations, the weather usually determines the best time to travel to Morocco. During the winter months, from November to March, it can get quite cold and rainy especially in the Atlas mountains. Click here for average temperatures for all major towns and tourist destinations in Morocco. If you are leaving soon, check today's temperatures in Rabat, Marrakech including also Agadir .

The peak tourist season in Morocco in July and August. If you want to avoid the crowds and the heat, travel before or after this time. If you are traveling during these months then be sure to make some of your hotel bookings in advance especially along the coasts.

No vaccinations are required by law to enter Morocco but Typhoid and Hepatitis A are two vaccinations that are strongly recommended. It is also a good idea to be up to date with your polio and tetanus vaccines.

The Moroccan unit of currency is the dirham which is divided into 100 centimes. There are ATM's throughout Morocco in all of the major cities and most towns. Credit cards are accepted at most of the higher end hotels, restaurants and shops. You can change money and traveler checks at all major banks, bureau de change, and some hotels.

The biggest event on the Moroccan calendar is the month of Ramadan, during which Muslims fast during the daytime and break the fast at sunset. Most restaurants are closed for lunch (with the exception of those catering specifically to tourists) and things generally slow down. Travelling during this time is entirely possible, and the restrictions don't apply to non-Muslims, but it's respectful to refrain from eating, drinking or smoking in public during the fast. At the end of the month is the holiday of Eid al-Fitr, when practically everything closes for as long as a week and transport are packed as everybody heads back home. 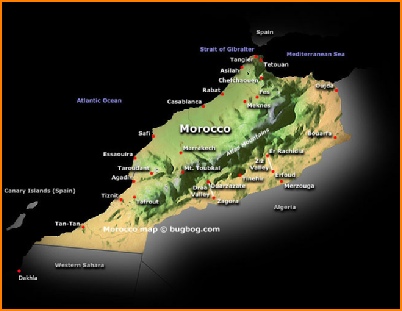 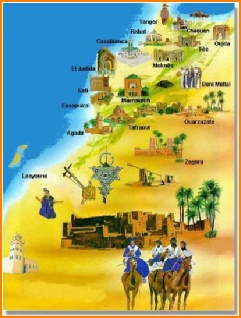